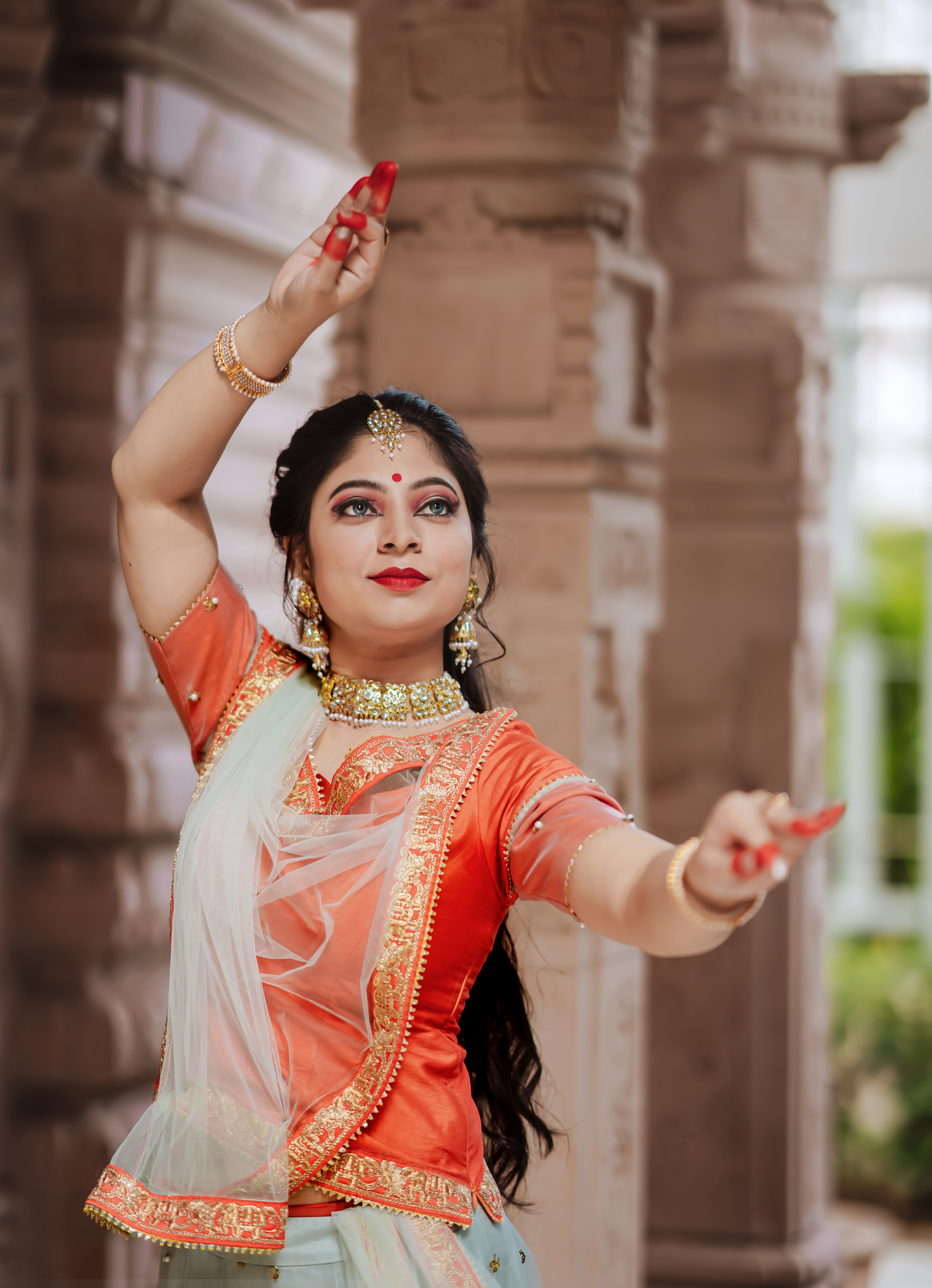 Kathak has a traditional and cultural heritage that gives it the status of the Indian classical dance form, (one of the eight principal classical dance forms of our nation). The technical and aesthetic aspects associated with Kathak have been passed onto generations verbally as an oral tradition. Like the majority of the art forms of India, Kathak thrives on the Guru-Shishya Parampara or the teacher-disciple tradition. 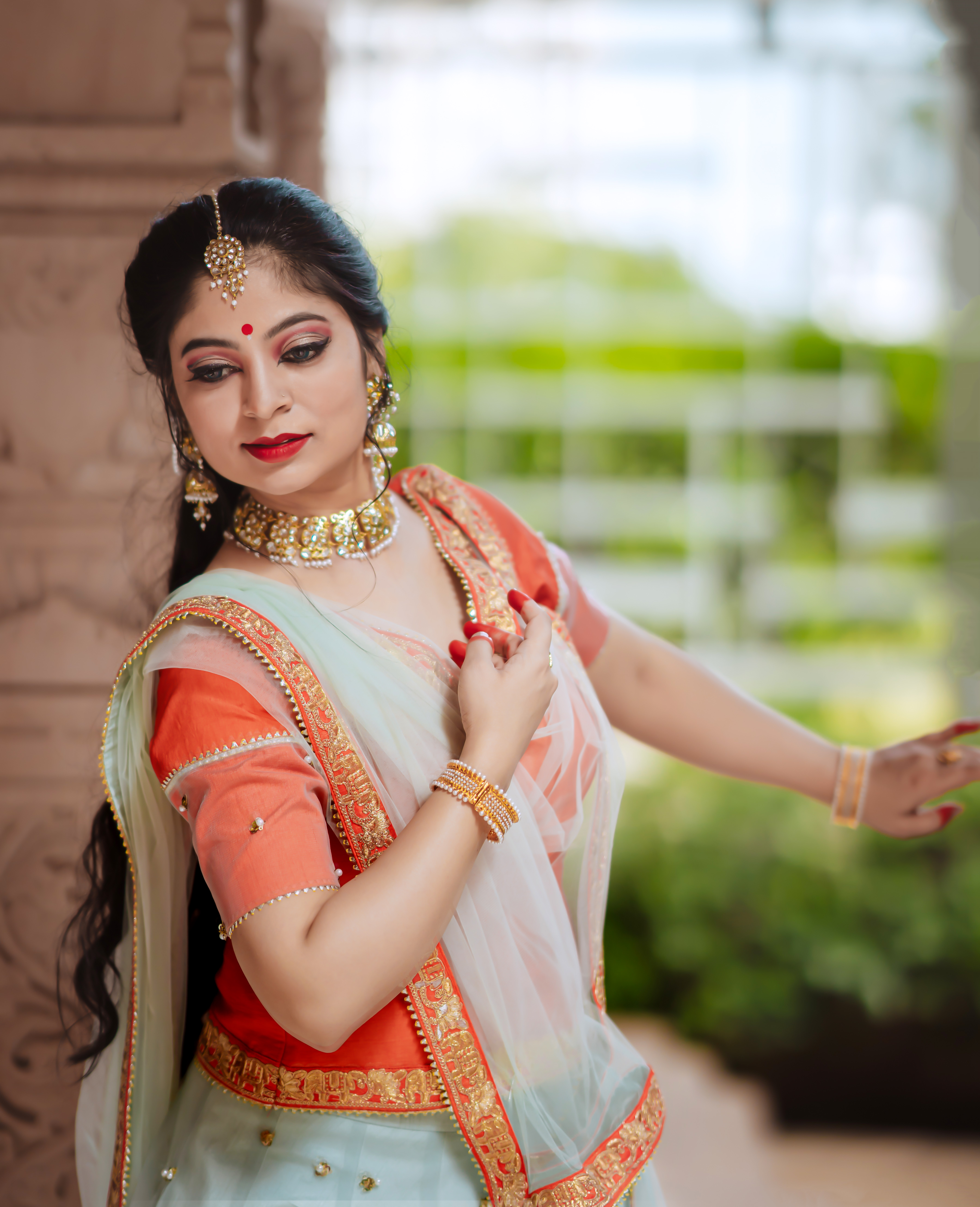 The term Kathak is derived from the Vedic Sanskrit word ‘Katha’ which means "story", and Kathakar which means "the one who tells a story". Wandering Kathakars or the travelling bards conveyed tales, inspired by our ancient epics and mythologies, through dance, songs, and music.

Kathak in the Era of the Bhakti Movement

Kathak evolved as an expression of devotion towards Lord Krishna. Studies suggest that Kathak started in Varanasi and the dance form travelled through Lucknow, Jaipur, and other parts of North and North West India.

The Lucknow tradition of Kathak believes that Lord Krishna appeared in the dream of his devotee, named Ishwari. He instructed her to develop dance as a form of worship, in her dream. Ishwari developed Kathak as a dance form and through her descendants preserved the learning and development, yielding the Lucknow Gharana of Kathak.

Kathak in the Bhakti movement era revolved around the theme which portrayed the immortal love between Radha, Krishna, and the milkmaids (Gopis).

Kathak in the Mughal Era

The invasion of the Mughals influenced the Kathak dance form significantly and gave it a new impetus. The emperors were patrons of Kathak dance and actively promoted the dance form in their royal courts. Kathak became a source of sophisticated entertainment and was redefined to lay more stress on the dance's graceful, expressive, and sensuous aspects.

Influenced by the Mughal culture Kathak performances incorporate Urdu Ghazals and commonly used instruments brought during the Mughal period even today. This makes it the only Indian classical dance form to carry Persian elements.

Kathak during the British Raj 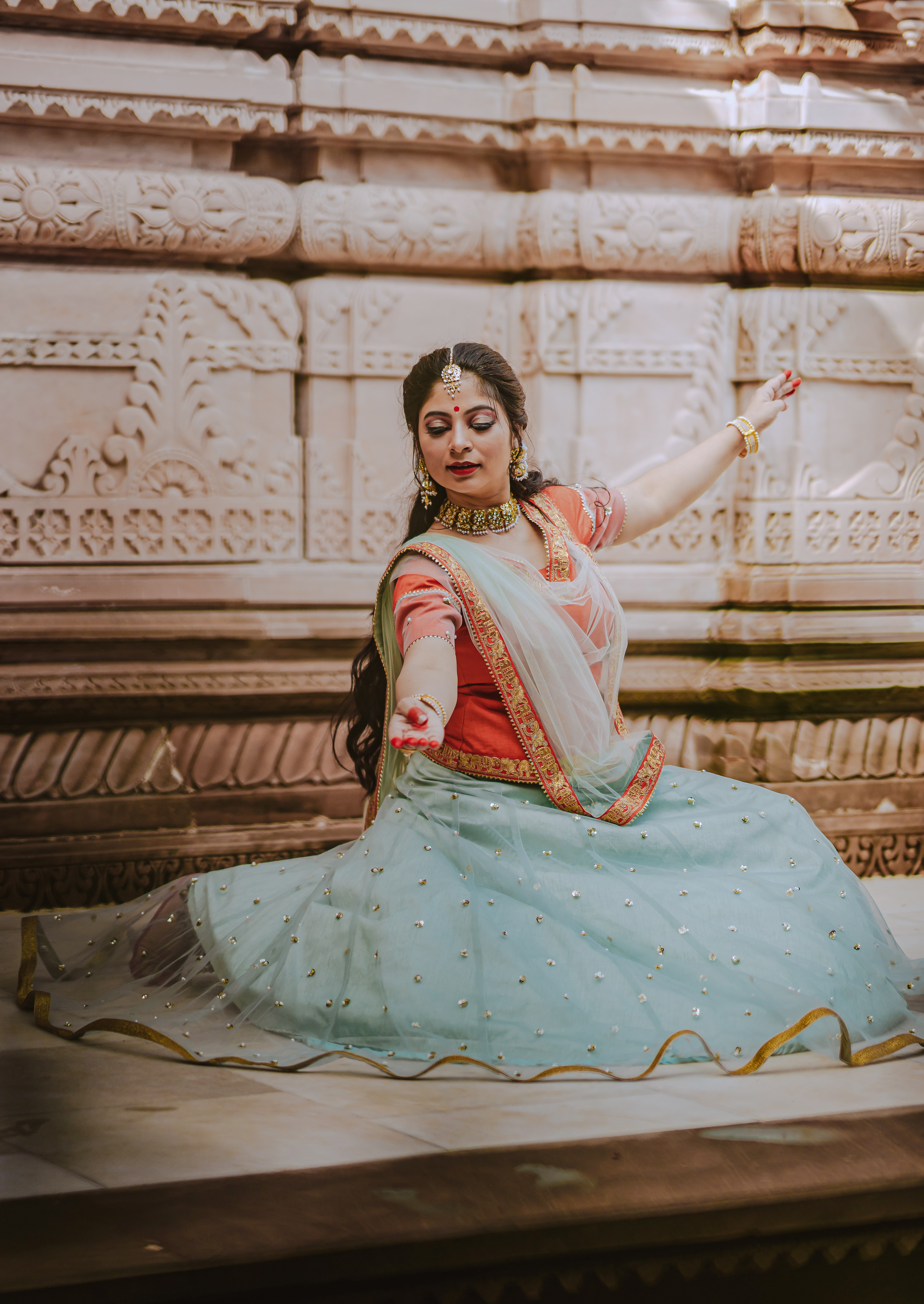 As mentioned in the Natyashastra, the important elements that complete a Kathak performance (like almost every other Indian classical dance form such as Bharatanatyam and Mohiniyattam) are as follows:

Nritta: The technical aspect of the performance in which the dancer performs pure Bharata Natyam movements with particular attention to speed, pattern, form, range and rhythm without the introduction of any interpretive elements.

Nritya: The aspect of the dance in which the dancer incorporates spiritual themes, feelings, and expressive gestures. In order to convey the Nritya, the body movements and gestures are typically slower and harmonized with the musical notes of the musical piece.

Natya: Conveyed with the dancers maintaining particular body movements for specific characters which are communicated through interpretive dance.

There are three traditions of Kathak, the Banaras, Lucknow, and Jaipur Gharanas inspired by  the names of the cities in which they flourished. While the Jaipur Gharana focuses more on foot movements, the Banaras and Lucknow Gharanas focus more on facial expressions and graceful hand movements.

Stylistically, the Kathak dance form emphasizes rhythmic foot movements, adorned with small bells (Ghungroo) and the movement harmonized with the music. The legs and torso are generally straight, and the story is told through a developed vocabulary based on the gestures of arms and upper body movement, facial expressions, neck movements, eyes and eyebrow movement, flexible bends and swift turns.

The main focus of the dance becomes the eyes and the foot movements. The eyes work as a medium of communication of the story the dancer is trying to communicate. With the eyebrows, the dancer gives various facial expressions. The difference between the sub-traditions is the relative emphasis between acting versus footwork, with the Lucknow style emphasizing acting and the Jaipur style famed for its spectacular footwork. 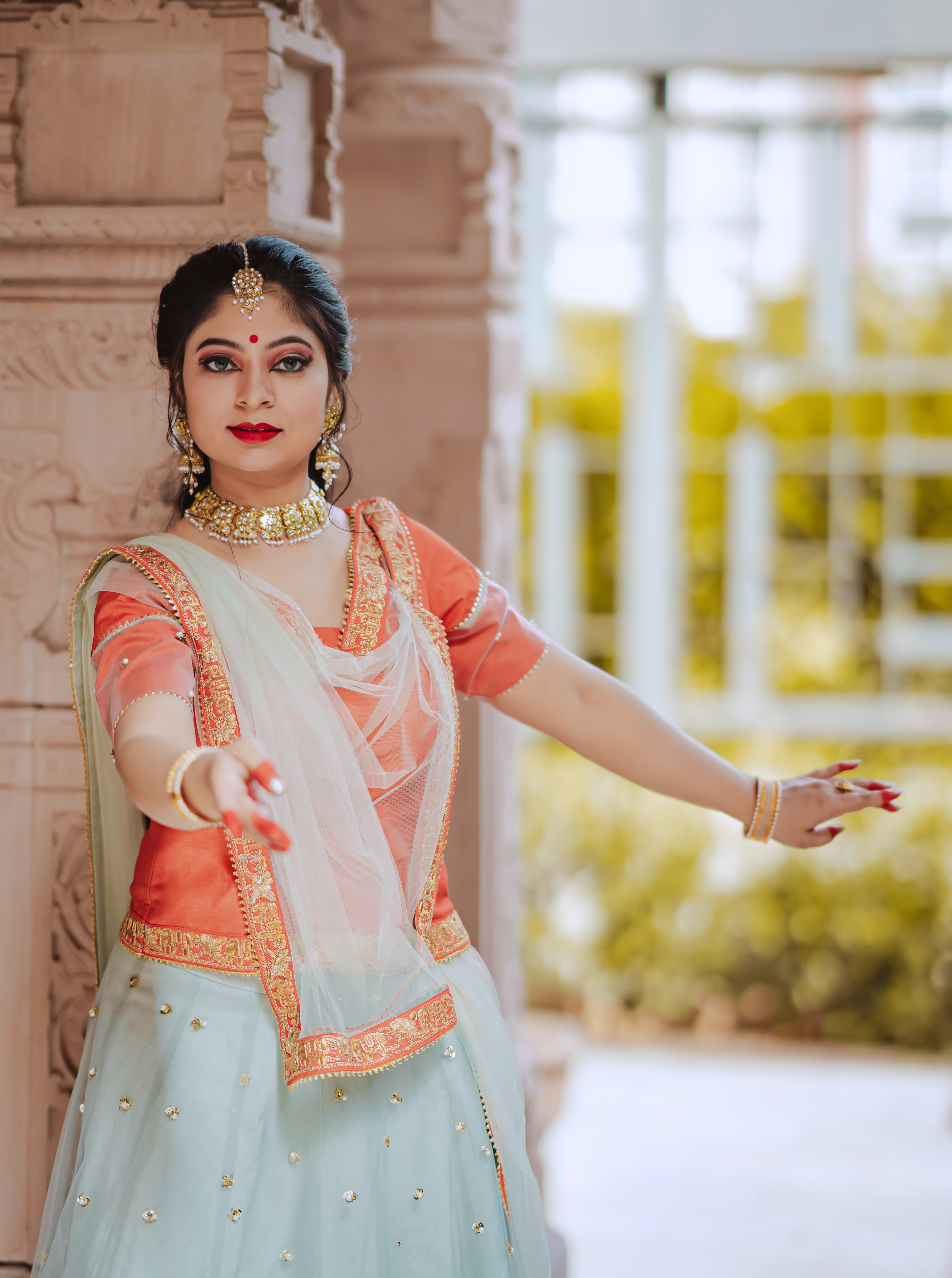 The costumes vary among Kathak performers and find their sources in either Hindu or Muslim culture.

The Hindu costume for female dancers has two variations. One is based on a Sari but is worn in a style different from the customary style that goes over the left shoulder. A Kathak artist generally wraps the sari around the waist and it hangs down from the left. A blouse called a choli covers the upper body. The artist may wear a scarf (called Orhni in some places). Hair, face, ear, neck, hand, wrist and ankle jewellery, typically of gold, may adorn the artist. A tika or bindi in the middle of the forehead is common.

The second variation of a Hindu Kathak dancer uses a long, full (just above the ankle), light-weight skirt usually with an embroidered border that helps highlight the dance moves. The skirt is contrasted with a different colour choli, and a transparent scarf typically drapes over it and the dancer's head. Jewellery is typically present in the second variation.

The Muslim costume for female dancers also uses a skirt, but includes close-fitting churidar pyjamas and sometimes a long coat covering hands and the upper body. The head has a cover scarf and the jewellery is light.

The Hindu costume for male Kathak performers is typically a silk dhoti draped around the waist, and covered with a silk scarf tied over the top. The upper body is usually left bare or with only the Hindu thread but is sometimes covered with a loose sleeveless jacket. Kathak male artists also wear jewellery, but often of stones and much simpler than the female artists.

The Mughal costume for male Kathak performers is the kurta-churidar. The kurta can be a simple one or cut as an angarkha. There is also the possibility of adapting the angarkha or kurta for dance to incorporate a wider flare in the lower portion. Particularly older variety costumes include the small peaked cap too.

Music and Instruments that Accompany a Kathak Performance

Dhrupad, one of the ancient music genres of India, is widely used to intensify a Kathak stage performance.