Best known as the signature sound of the Scottish Highlands, the bagpipe instrument has been played in many variations all over the world for centuries. Bagpipes are classified as wind instruments but are often categorized as woodwind instruments due to the use of reeds. Bagpipes are also called simply 'pipes,' or a 'set of pipes' and the player referred to as a piper.

Unlike any other type of instrument, bagpipes have a unique construction that varies between makers and regions. Today, the majority of all bagpipes are made in Pakistan. The standard design consists of a bag made from animal skin or rubberized cloth that serves as an air reservoir. Attached to this bag are multiple reed pipes (called drones) through which sound is produced, a blowpipe through which air is passed into the bag, and a melody pipe with finger holes (called a chanter). Each pipe is held in place by wooden sockets called stocks.

Air is blown into the bag while the bag is squeezed with the arm or struck with the hand to produce a continuous stream of air. The blowpipe typically has a non-return valve, allowing the player to inhale without affecting the air reservoir. The air vibrates through the chanter and the reeds in the drones to produce the distinct harmonic sound of the bagpipes. Bagpipes instrument can have multiple drones and chanters to be used in different combinations but must have at least one of each. 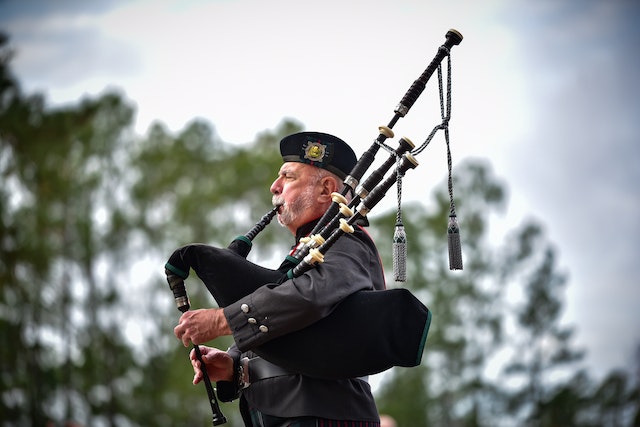 As with most ancient instruments, the exact origins are unknown. The earliest record of the bagpipes comes from a Middle Eastern sculpture dated 1000 BCE. The ancient Greek instrument askaulos has been considered a predecessor of modern bagpipes, as well as the first-century Roman instrument tibia utricularis, which consisted of a reed pipe with an air reservoir made of an animal bladder.

Bagpipes were traditionally folk instruments, found simultaneously in North Africa, North Asia, the Arabian Peninsula, as well as throughout Europe during the 9th through 13th centuries. The earliest use of bagpipes was for dancing, due to the ability to play music without stops or breaks. The specific number of reeds and pipes varies, as does the materials used, but all of these instruments shared an animal skin bag with reed pipes attached. Early examples of bagpipes used an entire goatskin or sheepskin for the bag, with the pipes attached in place of limbs.

Military use of bagpipes spread throughout Western Europe during the 15th century, likely because of the instrument's capacity for a loud, continuous sound. The classic Scottish Highland bagpipes came into existence during this time as they were used on the battlefield in place of a trumpet. It was during this time that classic battle tunes, marches and salutes were written for the bagpipes. During the 17th century, piping families became prominent in the Highlands, which lead to the endurance of the Scottish bagpipe, including its use during the first and second world wars.

Electronic bagpipes were invented in the 1960s and have continued to be improved and developed over the years. New innovations in electronic bagpipes were made as recently as 2016, when optical fingering detection instruments were developed called the 'a-pipes.' Today, bagpipes are frequently used during funerals, memorials and in police and fire services throughout the United Kingdom and the United States. They're also popular among militaries all over the world, mostly in foreign militaries influenced by the British Army. Bagpipes have also seen a recent resurgence in folk dance music worldwide, which was one of the original uses for the instrument.

There are dozens of versions of the bagpipes still played throughout the world, mainly in Europe and the Middle East. The most iconic type of Bagpipes is the Great Highland bagpipe from Scotland with the traditional plaid bag, but they are many other types of bagpipes popular all over the world. 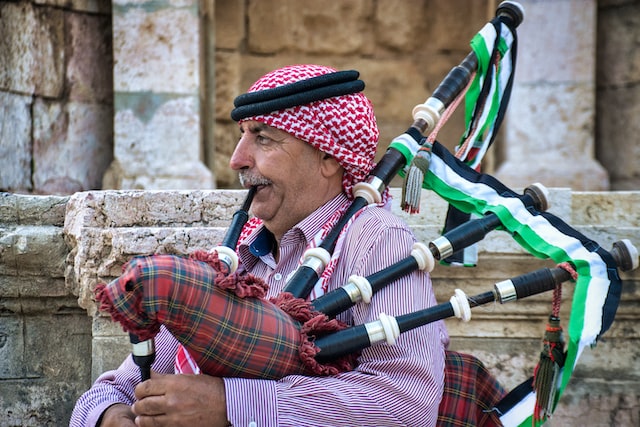 Cauld Wind Pipes: These pipes date back to the 17th century and are still used today. Rather than the bag being filled with the player's breathing, these bagpipes are filled from bellows fixed under the player's arm. The bellows take air into the bag without being heated by the player, allowing them to use more delicate reeds in the drones. Types of bellows-driven bagpipes include Irish uilleann pipes, English border pipes and the French musette de cour.

Gaidas: Gaida bagpipes originate in Southeastern Europe and are played widely throughout the Balkans. These instruments typically have larger air reservoirs, one drone and one chanter. Traditional gaidas were made from sheep or goat hide turned inside out, leaving the inside of the bag lined with fur. This prevents moisture buildup inside the bag. Similar to the gaida is the gaita, bagpipes from Spain and Portugal.

Mashak: These bagpipes from Rajasthan and Uttar Pradesh in Northern India have been known by many names including mishek, moshuq, bin baji and masak-been. These bagpipes are also popular in parts of Pakistan and Afghanistan. Popular at weddings and festivals, mashak pipes use single reeds and typically have one drone and one chanter. Similar bagpipes are found in other parts of India, namely the titti in Telugu and the veen vaja in Punjab.

The first technique that any beginning piper must learn is air pressure control. Learning to master steady blowing into the instrument is key before learning to play either the drones or chanter. It's recommended that pipers learn to control the air flow into the drones and the chanter separately before using them at the same time. Once breath control is mastered and the player is able to comfortably fill the bag, the following techniques are used to produce different sounds. Strike: Once the bag is filled with air, the air has to be pushed through the reeds. This is achieved by striking the bag with the palm of the hand. Where on the bag the player strikes depends on the instrument and the player. The initial strike is harder than subsequent strikes when the player can simply push on the bag to continue the air flow into the instrument.

Blow: Refill the bag with air immediately after each strike to maintain the air reservoir. Finding the right timing and speed behind the blow is a technique learned individually for each player. Mastering the combination of striking and blowing to maintain air pressure is called maintaining.

Overblow: This technique causes the reed to jump an octave by increasing the pressure of air through the reed.

Sliding: A sliding pitch change created by rolling the finger off of a sound hole on the chanter.

The chanter and drones of a bagpipe require frequent tuning because reeds must be adjusted often. Reeds are thin pieces of wood located in the drones and chanter, either as a single reed or double - which has two reeds pressed together. The air from the bag enters the drones and chanter to vibrate through the reeds to produce sound. The type of reed, as well as the shape and thickness of the reeds, alter the pitch of the sound.

Because the chanter is the melody pipe and has changing air flow speed and temperature, the reed must be replaced often. The reeds in the drones are less taxed during playing and therefore last longer. The reeds are tuned to the key of the player's choice and must be practiced as often as playing to achieve the desired tone and pitch.

The chanter is the melody pipe, which is played by covering sound holes in different combinations to achieve different notes. The fingerings vary and depend on the style of music being learned by the player.

There are many talented pipers throughout history and modern-day. Below are some of the best contemporary bagpipes players from around the world.