Importance of Taal and Laya in Indian Classical Music

Importance of Taal and Laya in Indian Classical Music

What is Laya & Taal in Music?

Melody and rhythm are two integral parts of music. They go hand in hand and complement each other in the composition as well as during the rendition. Music is incomplete without either of them. Hence, as it is important to sing in tune, it is equally important to understand the rhythmic aspect of it. In Indian classical music, rhythm is maintained through Taal and lay.

What is Taal in Music?

Taal is a cycle of beats. Beats are referred to as Matras in Indian classical music. Each beat/ matra is represented with the help of syllables that are equidistant from each other.

One cycle of beats is called Avartan. The first beat of each Avartan is known as ‘sam.’ While writing the bol of the Taal, sam is represented with the help of a plus (+) sign. An Avartan starts with ‘sam’ and ends with a ‘sam.’

When Taal is introduced to music and dance, the beats are demonstrated with the help of claps (representing ‘Taali’), tapping fingers on the palm ((to represent the subsequent beats/ matra), and waving one hand in the air (representing ‘Khaali’).

Here is an example of one Avartan in Teen Taal and how it starts with the first Taali and comes back to it on completion. Irrespective of whether the Taal is demonstrated on hand or any other percussion instrument, it will follow the same diktat. Teen Taal consists of 16  beats in a single Avartan - 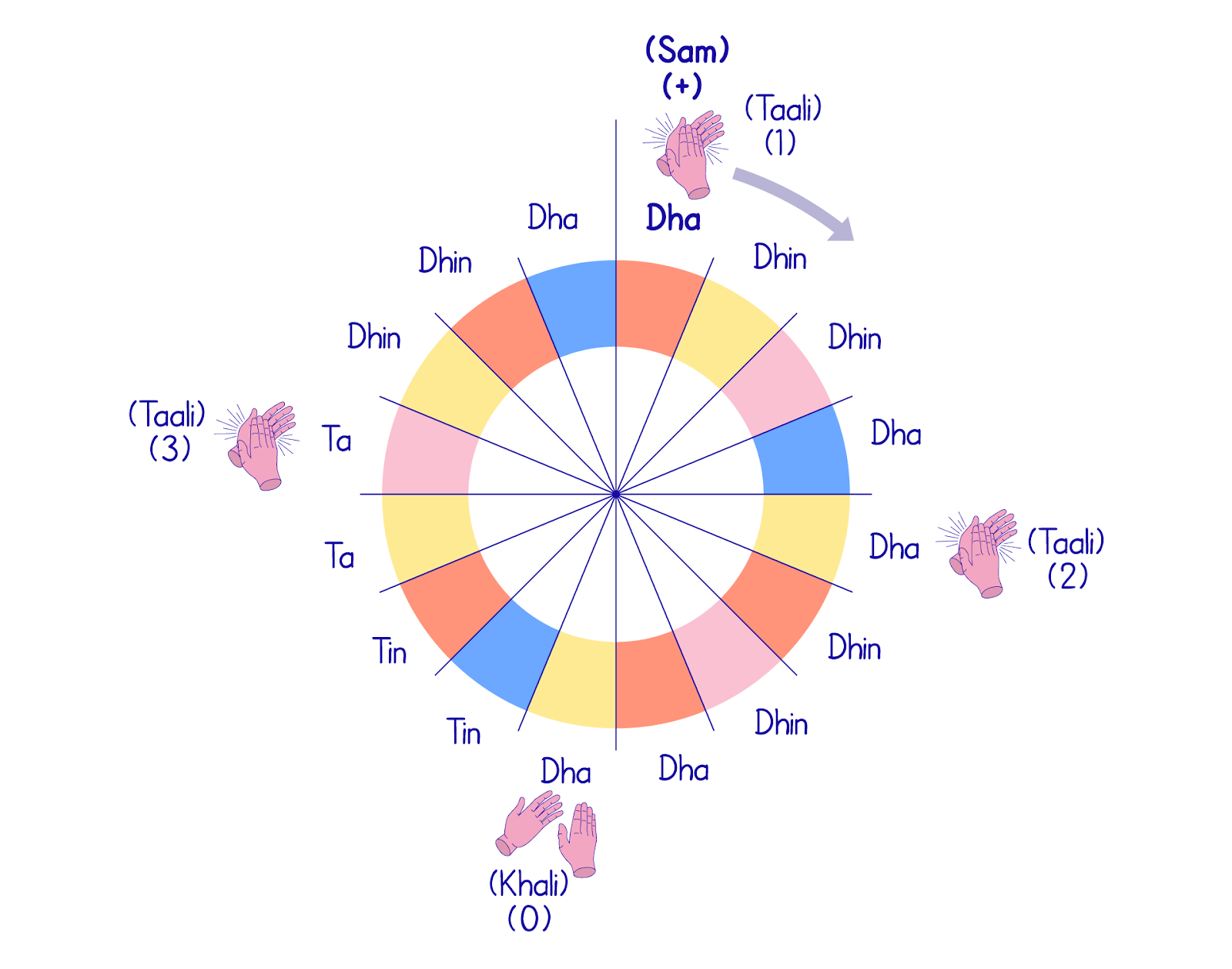 In each Taal, the total number of beats is divided into clusters that are termed Vibhag or Khand. The above example of teen Taal is divided into 4 Vibhaag. Each Vibhaag is separated with the help of a vertical line or Purna Viram in Hindi.

Generally, for khayal gayan 10, 12, 14 and 16 beats taal are used. The song may start from sam or any other beat, but the percussion will start from sam.

Here is an example of a bandish (lyrics) based on teen Taal. The bandish starts from the 12th matra. 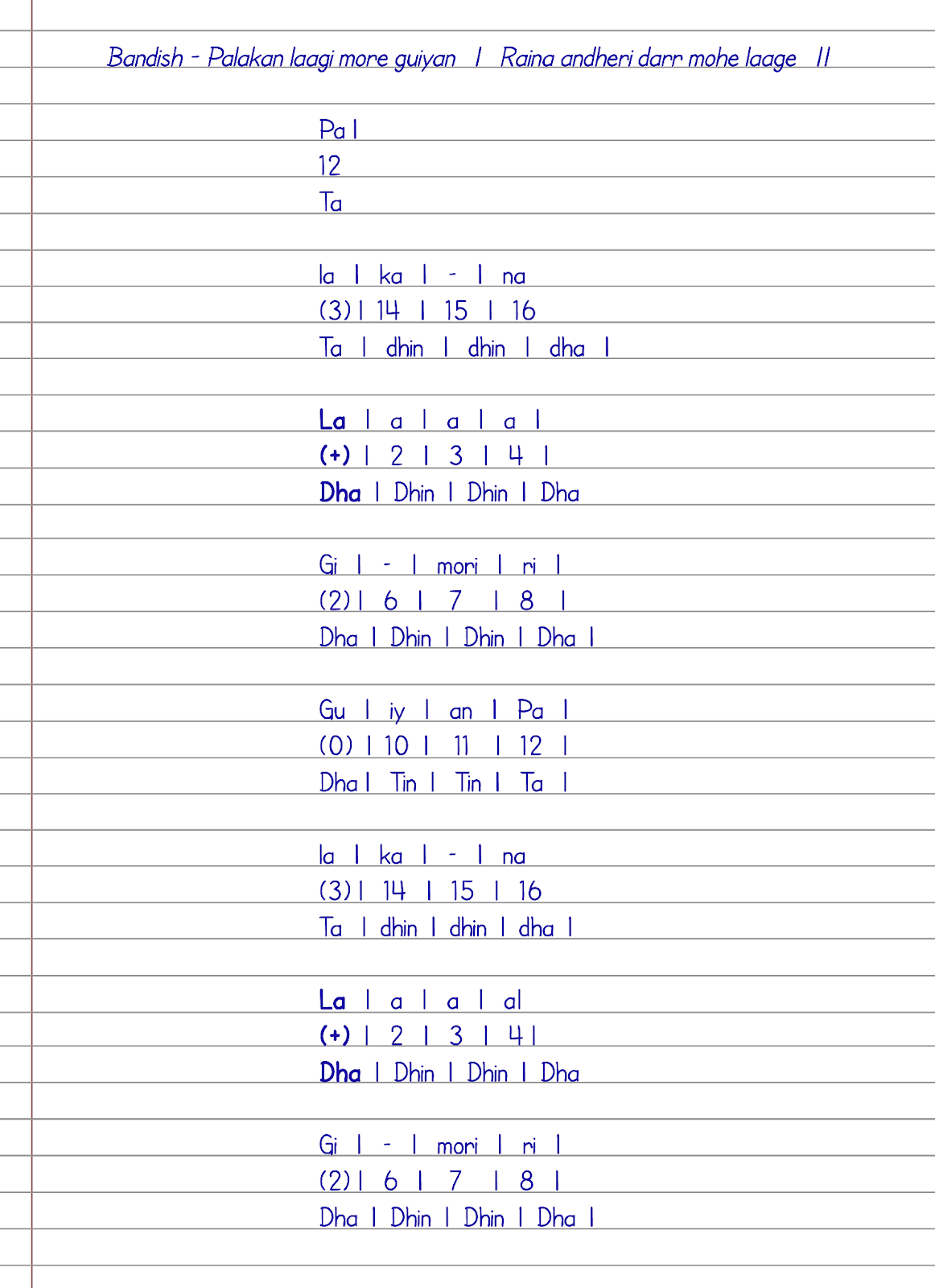 This is how the Avartan keeps repeating till the end of the song binding the lyrics and the melodies in a well-defined rhythm. The entire melodic structure of a raga rests on this rhythmic time cycle of the Taal.

Tracing the origin of Taal

The earliest mentions of Taal are found in the ancient scriptures of Samaveda and Rigveda. All the verses follow a metric structure and sequence. However, since these scriptures were practised orally, the concept of Taal was not explained until ‘Natyashastra’ by Bharat Muni was written.

Natyashastra is the first book in Indian history where each concept related to the three verticals of sangeet, namely - Vadya, Geeta, and Nritya is explained in detail. It also elaborates that different musical instruments can be categorized into four types according to their acoustic principles. They are - chordophones (stringed instruments like Taanpura), aerophones (hollow instruments such as flute), idiophones (made of solid metal such as brass cymbals), and membranophones (such as tabla).

The first two types of instruments are used to create melodies, while the latter duo help to establish the rhythmic pattern or the Taal.

At the time of the oral tradition, as is mentioned in the Sama and the Rigveda, while singing, Taal was demonstrated through hand movements.

Later, solid metal or earthen instruments (idiophones) such as a bell, cymbal, gong, wooded block, thali, Khartaal, etc., debuted as deserving accompaniments to music. Sound is created through these instruments by striking them with each other or with a wood object.

The other set of instruments used to establish rhythm includes membranophones. These are mostly wooden or metallic bodies, hollow from the inside, and covered with some kind of skin/ membrane on a single side or on both sides. Examples of membranophones include - tabla, mridangam, pakhawaj, and drums.

Moving ahead from here… the concepts of Taal were vividly documented in a book named Sangitaratnakara. The book was written by Sarngadeva in the early 13th century. It is the first time that the different types of Taal were mentioned and their structures were elaborated.

A very exhaustive and elaborate system of Taal in Carnatic music includes - 72 Taal under the Melakarta system, 4 Taal in Chapu system, 108 in Chanda, and 35 in the Suladi Sapta system.

Some of these Taal such as Ektaal, Chautal and Dhamar support slow to medium tempo. They were picked for performing Bada Khayal.  Teen Taal, also known as Tri-tal is believed to be the most versatile of all that supports all the tempos with equal aplomb. Hence, most of the Bandish in Hindustani classical music uses Teen Taal.

What is Laya in Music?

Lay can be explained as the distance between two beats. Hence, the lesser the distance, the faster is the tempo of the song and vice versa. There are three types of lay - Vilambit lay, Madhya lay and Drut lay.

In semi-classical music, the laya or tempo of a song depends on the mood of the song. A very peppy and energetic song will have a very fast tempo, a romantic song or a Gazal will have a medium tempo, while a sad song will be sung at a slow tempo.

Lay is increasing keeping the basic structure of the Taal intact. Thus the concept of Thah, du-gun, Teengun, and chou-gun come into play.

Let us take the example of Dadra Taal. 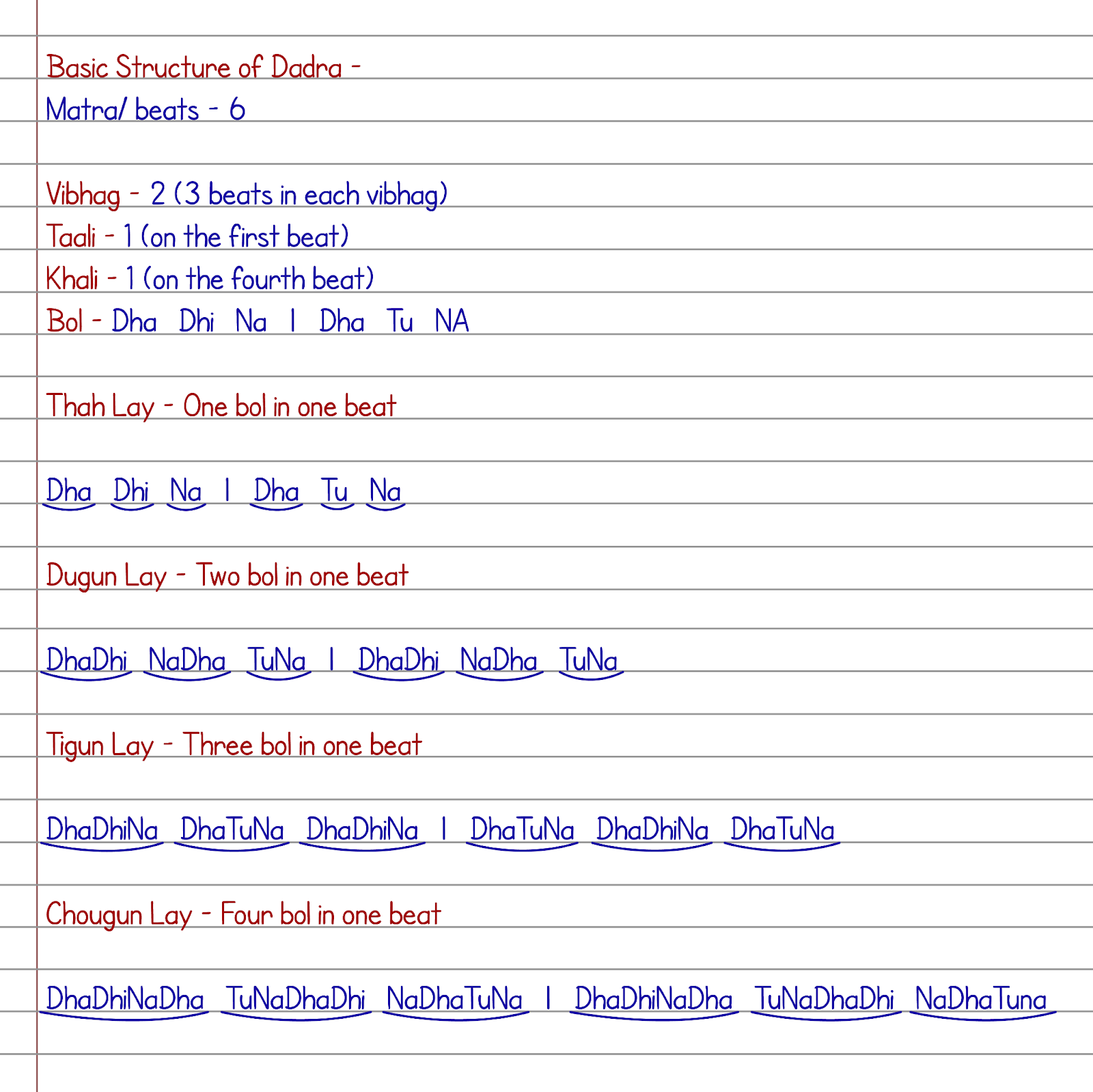 Thus the Laykari of Taal is improvised depending on the melodic composition of a musical piece.

When you master the art of expressing a sound beautifully, it becomes swara. Beautify it with a harmonious blend of Sur, Taal and lay - it becomes music. Add your thoughts to it - it becomes Khayal.

Sur-Taal, tune, and rhythm are a part of the universe. It is not something that was invented or created by humans. It is there - all around us. It is for us to find it within us. Just like we find Sur - first through our ears and then in our vocal cords. Subsequently, we learn to use our vocal cords to express Sur. The same holds for Taal and lay as well.

The rain drops in a rhythm, and the way we breathe also follow a certain rhythm. All we have to do is to understand the principles of Taal and lay that go into making melodies. Only then will we be able to understand music in its totality.

If you wish to explore the treasure trove of Indian classical music and hone your vocal skills, please check out the online Hindustani music classes at ipassio.com.