A flute is an instrument that is synonymous with words like melody and rhythm because of its sound.

Leading the woodwind family, the flute is often featured in solos and also is the soprano voice in many orchestral and concert band pieces.

Modern orchestras often use the flute to convey different cheerful or sad emotions.

While learning the flute can offer many rewards and provide a lifetime of joy, bad habits, and poor playing style can affect one’s progression and overall enjoyment of the instrument.

Whether you’re totally new to playing the flute or haven’t picked up the instrument for a few years, there are a few important things to keep in mind.

From maintaining your instrument to understanding proper flute assembly, here are some tips for new flute players to keep in mind as they begin or revive their musical journey.

Acquaint yourself with the different components of this musical instrument

To be the best you can be at playing the flute, you should know all of the usual names of the parts of the flute and what function they perform.

The flute is not made of one continuous piece of metal; it consists of three different sections that can be assembled together.

These are the head joint, the middle joint, and the foot joint.

The head joint, more commonly known as the neckpiece (1) is where the sound of the flute originates as the player blows air into the flute.

The player places his/her lips onto a lip plate (2) in the head joint to create the sound which then turns into the desired rhythm due to the flute keys.

Flute keys (3) are the small round padded metal covers that help to create the rhythm when held accordingly.

These keys are mounted on the middle joint or the body (4) of the instrument.

They change the flow of air in the instrument and thereby raise or lower the pitch.

Most of the keys are found on the body joint of the flute.

The ones closest to the player are controlled by fingers of the left hand, while the ones on and near the foot joint are played by the right hand.

The foot joint (5) is where sound emits from the flute.

It is a short section that has a small number of keys, depending on the type of flute.

The Beginning Journey May Require You To Be Patient With Yourself

As you begin to experiment with new fingerings, avoid confusion by moving from one familiar note to a second, less familiar one.

As you master these two notes, add an extra note to the mix. Once you’re comfortable playing three notes, move onto four, and so on.

Some fingerings are easier than others, so work with your teacher to create exercises that ascend and descend slowly.

When the combinations become easier to play, challenge yourself by picking up the tempo accordingly.

Whatever you do, stay patient- new flutists won’t pick up everything overnight, so patience is key.

The Right Posture & The Accurate Way of Holding Solves Most Issues

The flute is perhaps rivaled only by the violin in regards to how awkward the instrument is to hold.

In fact, virtually every new flutist has trouble holding their instrument at first. As a beginner flutist, learning the proper posture and position is crucial.

Younger children are often at a disadvantage due to the small size of their hands, which makes learning and maintaining the correct position even more important.

It’s difficult to learn the proper hand position from a book or website, so seek guidance from your flute teacher, as they’ll be able to teach you proper formation.

As for posture, sit up or stand as straight as possible, with your chin raised and your eyes looking straight ahead.

This will open up your body, allowing you to produce clearer, longer notes. If you’re using a music stand, keep it at eye level.

Try Out Your New Instrument & Check its Quality

Many new flutists often purchase a used flute in order to save money.

While purchasing a used flute is great for its money-saving properties, some used flutes are in desperate need of repairs, discouraging students who are unable to produce a good sound on the flute.

It’s difficult for an orchestra director to distinguish which flute needs repairs out of the bunch; therefore, it’s important for a professional to “test play” your flute.

During this test play, your flute teacher will try playing the lowest notes, which are more susceptible to leaks, the highest notes, and every note in between.

Learn how to Properly Assemble the Instrument and its Harmony 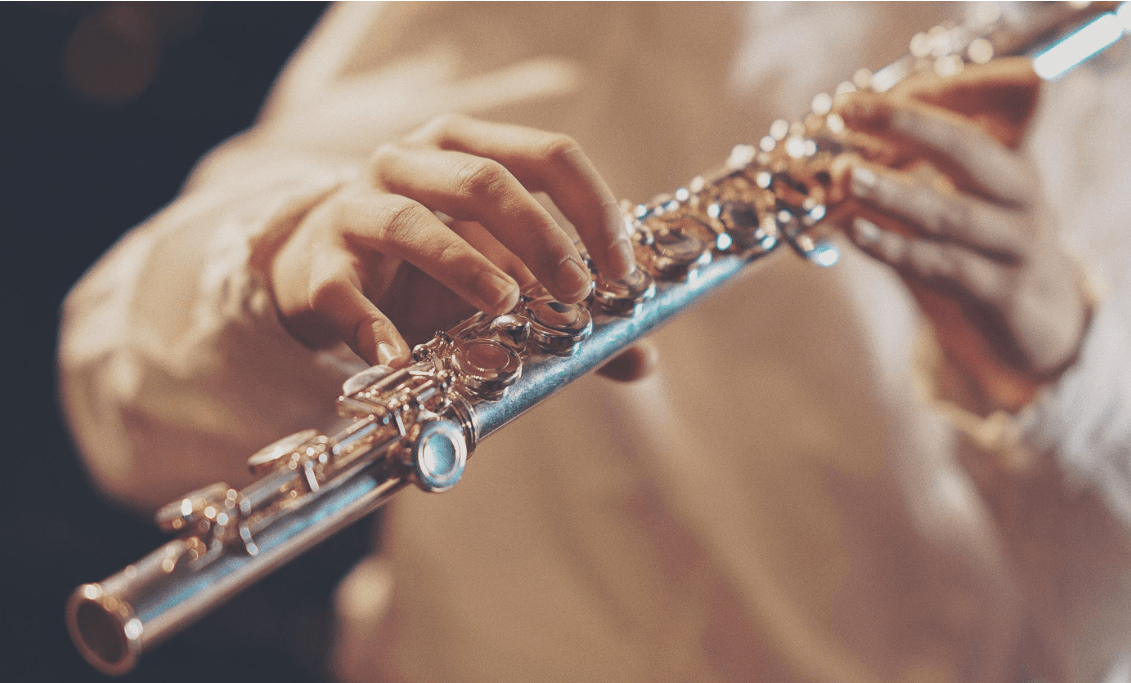 Many students accidentally cause damage to their flutes during assembly, so it’s important to learn the proper assembly of your instrument.

The most important thing to keep in mind is to avoid twisting the mechanism.

When joining the head joint and the body of the flute together, hold both parts of the flute above or below the keys and lip plate.

Another important aspect of flute assembly is aligning the headjoint and footjoint properly.

Many new flutists push the headjoint all the way into the body even though flutes are designed so the headjoint should be slightly pulled out in order to play in tune.

Before you assemble or disassemble your flute, run through the process with your teacher or a repair technician- that way, you’ll understand the proper assembly of your flute and will effectively avoid accidentally damaging it. 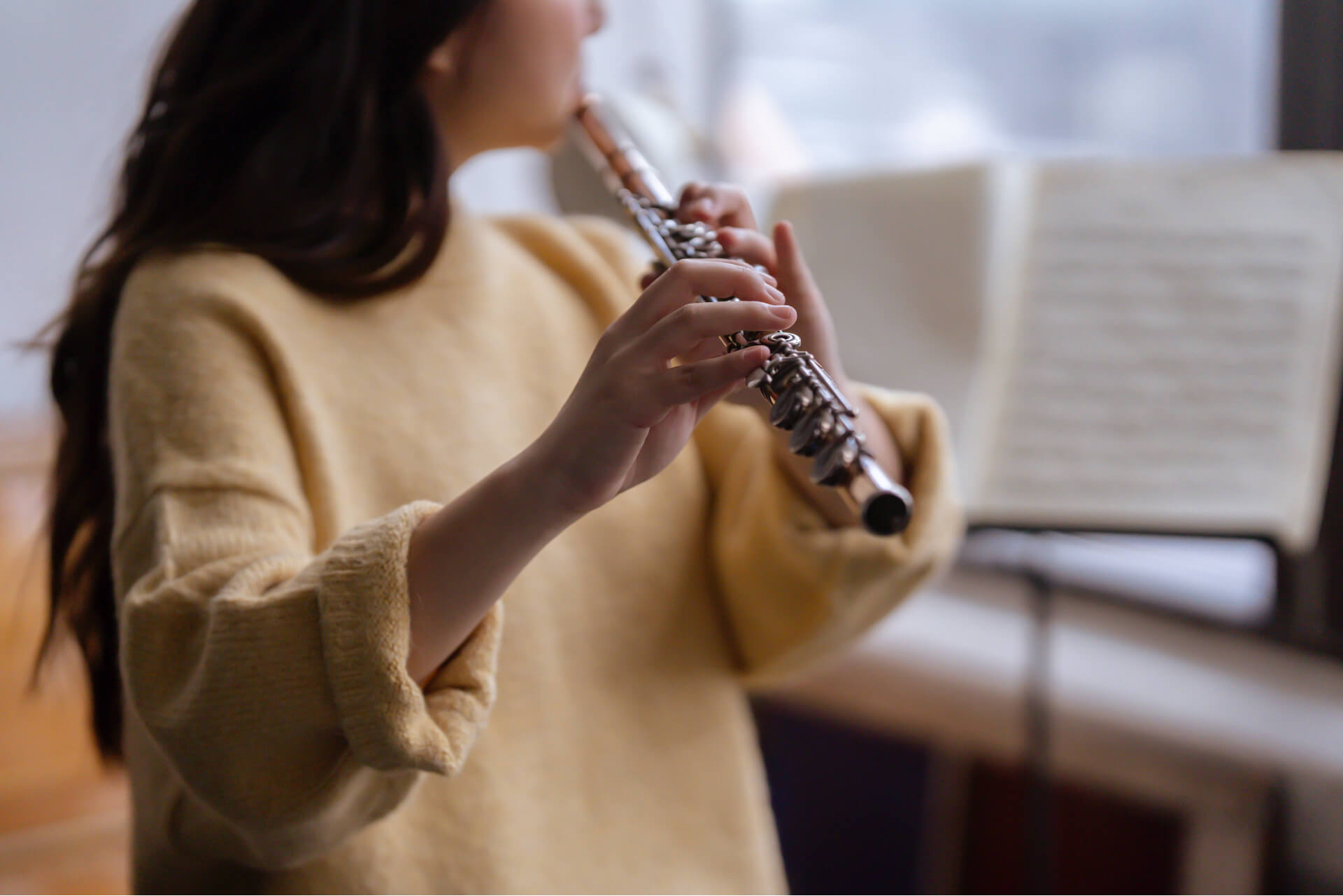 While maintaining the instrument by swabbing the flute after each use is important, it’s important to avoid using key oil or polishing cloths.

Oil can easily leak onto the pads when applied by a student. Plus, keys need to be oiled about as frequently as a flute needs repair, so it’s best to leave the oiling to the professionals.

Polishing cloths are intended to remove tarnish, but they deposit a residue on the keys and in the mechanism.

To effectively avoid accidentally tarnishing your flute, purchase a flute cleaning kit from a trusted brand.

The contents of a kit vary from kit to kit, but most will include polishing mitts, handkerchief swabs, and duster brushes.

As a beginner, it’s important to practice every day without wearing yourself out.

Practicing in shorter, yet highly productive sittings is far more productive than a couple of drawn-out cram sessions right before your lesson.

Start out by practicing 15-20 minutes per day, and increase that number as you become more proficient at playing the instrument.

Make your practice sessions goal-oriented, as this will help you remain focused.

For example, aim to perfect the transition from an A to a B during one session, and aim to work on your posture during the next.

If you practice every day and gradually increase the length of time accordingly, you’ll notice less stiffness and greater improvement over time.

What Will I Learn During Lessons?

Unlike the guitar or piano, playing the flute is less intuitive. Essentially, it’s not an instrument that can easily be self-taught.

A good flute teacher should be able to teach you everything from the correct flute embouchure formation to proper breathing and posture.

Whether you choose group or private lessons is ultimately up to you, especially since each has its own unique set of pros and cons.

Some students learn better in one-on-one sessions, while others prefer the camaraderie of learning in a group.

So that was our set of tips for beginner learners on how they could continue on their learning journey if they keep these pointers in their minds.

If you wish to learn more, explore ipassio’s Online Flute Courses that are available and cover different genres.

Sign up for our Flute lessons that are taught OnliVe (Online + Live), exclusively, on a 1-on-1 basis. Click here to know more.