The modern standard drum set includes a snare drum, bass drum, two tom-tom drums, a hi-hat, and a cymbal. Drum instruments are highly customizable and many drummers incorporate a wide variety of instruments into their kits. However, the standard set is what most students learn on when taking drum lessons.

Drum sets are arranged in a semi-circle around the drummer, who is seated on a stool in the center. The player uses wooden drumsticks to strike most of the instruments, although other tools, like a brush or rute, may be used. Bass drums and hi-hats are operated by foot, allowing the drummer to achieve the complex rhythms the drums are known for.

The snare drum is mounted on a stand in the center of the set and produces a staccato sound. This effect is created by a series of wires stretched under the bottom skin of the drum. Tom-tom drums are similar to the snare drum, except they do not have wires. They can come in a variety of sizes, each with a different pitch but generally have a more hollow sound than the sharp snare sound.

The bass drum, also called a kick drum, is placed at the feet of the drummer and is operated by a pedal connected to a felt-covered mallet. Hi-hats are a set of two cymbals mounted on a stand that open and close by pedal and single cymbals are mounted on stands. 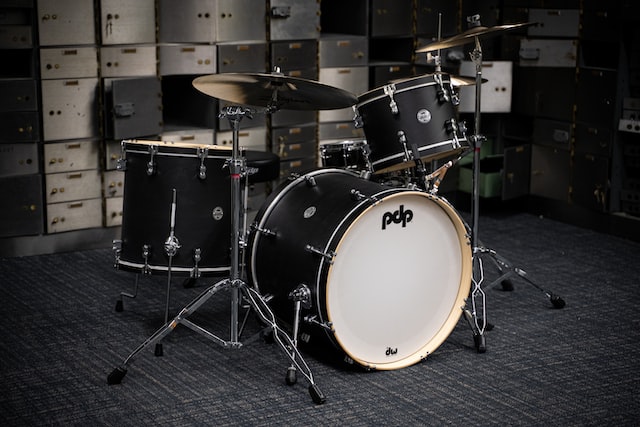 One of the later percussion developments, the drum set wasn’t invented until the mid 19th century. Prior to this development, percussionists played one instrument at a time. Foot pedals were introduced to drums in the 1840s and from there it was only a few years before percussionists were combining multiple drums into a single set. This had the advantage of creating more complex rhythms in popular music and allowing musical performances to have one drummer performing the job of many percussionists.

Originally, the drums were called a trap set and didn’t include standardized bass drum foot pedals—which were invented about half a century later in 1909. Prior to that, different types of self-fashioned pedals were used. Due to the invention of drum sets, rhythm in popular music became more syncopated and led to the birth of ragtime and swing music. Shortly after the bass pedal was invented, wire brushes started becoming popular. Many drummers play cymbals and snare drums with wire brushes, giving them a unique hushed sound.

When jazz music emerged at the beginning of the 20th century, drum sets gained further popularity by becoming the heartbeat of the genre. During the next several decades, drums evolved in size and variety, becoming more dynamic instruments. In the 1930s, orchestras and bands started boasting drum solos and the instrument started gaining worldwide popularity.

Today, it’s very popular for drummers have a mix of traditional drums and cymbals, electronics, and even found objects in their kit—like the brake drum from a vehicle. 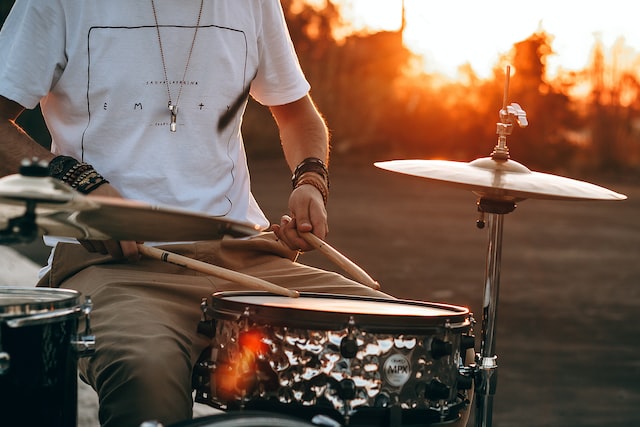 Beyond some standard configurations, the combination of instruments that make up a drum set can be individual to the player or genre. The designations for the various sizes of kits are below. Anything over these types is considered an extended kit.

Three-piece: The most basic configuration. Popular in the 1950s and 60s, this set consists of one bass drum, snare drum, tom-tom drum, hi-hat and a suspended cymbal attached to the bass drum (technically five separate percussion instruments). Beginners learning how to play the drums would find this set easy to start out with.

Four-piece: This version extends the three-piece by adding a second tom-tom drum and a second suspended cymbal. When there are two suspended cymbals they are for two different techniques called ride and crash. These sets were popular in 1970s rock bands and remain popular in modern jazz bands.

Five-piece: This is the most common configuration today. This set has the basic snare and bass drums, three tom-tom drums, two suspended cymbals and a hi-hat. Most pre-packaged drum kits come in a five-piece configuration.

Lounge kit: This is the smallest kit. The bass drum is replaced with a pedal-operated floor tom-tom and includes a snare drum and hi-hat. These are popular in some jazz bands and in rockabilly, where the drummer stands while playing. Lounge kits get their name for their popularity in small space performances like a coffeehouse. This is the only set that would likely not work for those taking drum courses. 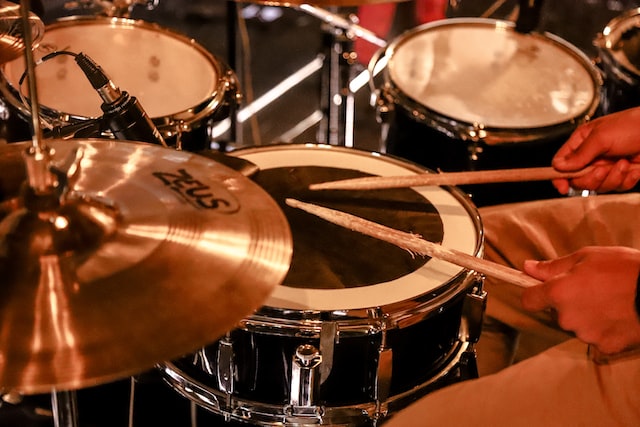 The standard technique for playing a drum set consists of two elements:

The groove sets a basic rhythm for the melody or other components of a piece of music. There are several rhythm patterns that make up standard grooves, like the syncopated backbeat or the swing shuffle.

Fills consist of the variations and ornamentations on a rhythm that fills in the space between verses in a song. They include any sounds that deviate from the repetitive groove, like a secondary rhythm on a cymbal, a few beats on different drums, or improvised short drum solos.

These two techniques can be achieved by learning to play the drums by ear, learning western music notation for percussion, learning taals, through improvisation, or a combination of all four. 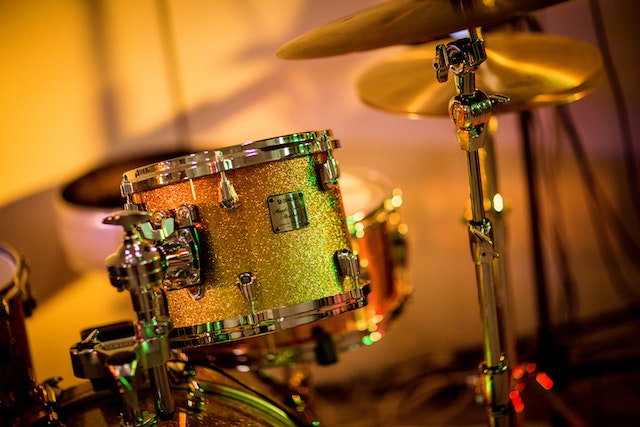 Most of the percussion instruments used in a standard drum set are considered non-pitched, meaning they produce a sound of indefinite pitch. The drums that make up the kit can be adjusted using a drum key. The T-shaped key adjusts the tension of the drum head(s) and therefore the pitch. Many drummers tune by ear or using a tension gauge.

There are many different types of each drum or cymbal used in a set—allowing them to be customized to style, genre or player. Tom-tom drums, for example, come in dozens of configurations—from small hanging drums to large floor drums—each lending a distinct sound to the drum set. Likewise, cymbals come in many different sizes and designs, each with a distinct sound.

Because the drums are one of the loudest instruments, certain measures are made to dampen the sound produced by the set. These practices also help reduce reverberation, which can distort the sound of the drums. The most typical practice is placing the drum set on carpets—which has the added advantage of keeping the set from moving while it is being played.

Drum screens are transparent Plexiglas shields that can be placed in front of or around the kit to dampen volume and reverberation. Screens that encircle the entire kit are called drum booths and are frequently used in recording studios. There are also muffles or mutes that can be placed on drum heads to reduce the ring or volume on a snare, bass or tom-tom drum. There are many talented and famous drummers throughout history and modern day. Below are some of the best contemporary drummers from around the world.