Santoor is a stringed instrument that has many variations all over the world but is particularly popular in Hindustani classical music. This type of instrument is considered both a percussion and string instrument and is classified as a zither—an instrument with strings stretched across the length of the body. Santoor musical instrument shares similarities with the piano and chordophone, as it produces sound when the strings are struck with a hammer. It has a vibrant tone and a wide range of pitch, making it versatile and distinctive.

The body of the santoor instrument is essentially a box shaped like a trapezoid with a frame made of wood—typically walnut or maple. The frame can hold anywhere from 40 to more than 100 strings, made from either steel, brass, or copper. However, the typical Indian santoor has around 90 steel strings. The metal strings are stretched across several moveable wooden bridges and connected to the sides of the frame with pins on the left side and tuning pegs on the right.

The strings are struck with lightweight wooden mallets, called mezrab, that cause them to vibrate across the soundboard. Santoor strings are grouped together in sets of three or four, called units or courses, that are typically tuned to one pitch and are struck as one, giving the instrument its unique tone. In the North Indian tradition, santoor players hold the instrument in their lap with the narrowest side pointed away from the body. The presence of several instruments resembling the santoor throughout the world since the sixth century CE makes it difficult to pinpoint its exact origin. As with many very old instruments, it may have been developed simultaneously by several different cultures. There are multiple theories about the Santoor instrument but most commonly it is believed that the Persian santur is the direct predecessor. The Santoor originated in ancient Mesopotamia around the 4th century CE and, in both pre-Islamic Persia and the modern-day Middle East, it is an integral part of classical and folk music.

The first written record of the instrument appeared in Persian history texts and poetry around the 10th century. Ancient Sanskrit texts also refer to the Shata Tantri veena, a 100-stringed instrument similar to the Persian santur, but an example of one wouldn’t show up in India for several hundred more years. In the 14th century, Persians brought the santur to the Kashmir Valley, making way for the Kashmiri santoor that would become essential to traditional Kashmiri folk music and Sufi music. Over time the instrument gained popularity but was still largely regarded as a folk instrument up until the mid-20th century.

In Jammu and Kashmir in the 1950s, Pandit Shivkumar Sharma adapted the santoor for North Indian classical tradition at the urging of his father. Most notably, he increased the number of bridges and strings, making it more appropriate for playing ragas. During this time the instrument also became more rectangular and the frame higher. This is the version that we recognize as the modern Indian santoor. late Pt. Shivkumar Sharma’s talent and persistence made the santoor an established part of Hindustani classical music and led the way for many santoor players in India. 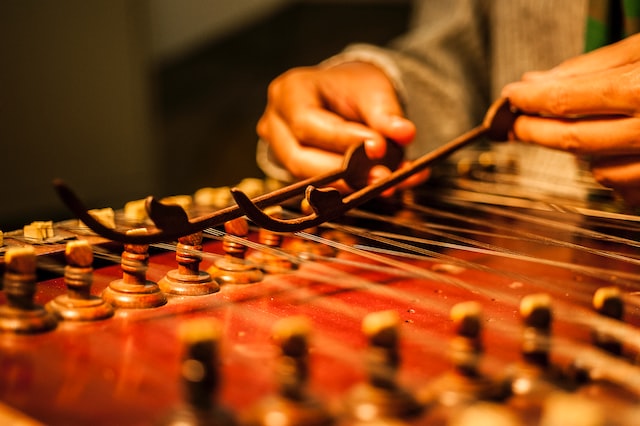 The santoor is a versatile instrument that has been adapted countless times and continues to see changes. Many regions and cultures have a distinct version of the instrument and even then, style and size vary between makers and musicians. One of the main differences between the Indian santoor and its cousins is the shape. Other struck zithers, like the Kashmiri or Persian versions, are much wider than the santoor and are traditionally played while sitting on a stand with the player seated before it.

All santoors and similar zithers have two rows of bridges lining the right and left sides of the soundboard, over which strings are stretched. The santoor musical instrument typically has between 80 and 100 strings, compared to the 72-stringed santur or the 144-stringed yangqin. The number of strings stretched across each bridge depends on the musician’s preference, but each unit contains two to five strings each. A typical santoor may have 90 strings stretched across two sets of 15 bridges, resulting in a total of 30 notes across three octaves.

Each santoor musical instrument requires a tuning tool to reach all tuning pegs and a set of mallets. Different types of mallets produce different sounds, but most are lightweight and wooden. Mallets are held between the thumb, index, and middle fingers of each hand. The striking end of the mezrab is curved upward, allowing the mallets to also glide across the strings. While many classical instruments have universal standards, the santoor is unique in that it can be customized to fit the preferences of the player. When beginners are learning how to play santoor, the basics and style of playing will depend on the teacher. Playing techniques are very individualized, especially as the santoor is often a solo instrument that lends itself to improvisation, or alap. Since the santoor has only been involved in Hindustani classical music for the last few decades, there are no standards yet established. The versatile nature of the instrument also makes it difficult to form traditional techniques. The strings are highly sensitive, resulting in a wide array of responses to subtle changes. As the strings are struck in sets, they vibrate against each other, producing a delicate sound.

Meend, or glissando, is a string technique that is very popular on the santoor, referring to gliding seamlessly from one note to another. The meend is essential to traditional Hindustani classical music and it was Pt. Shivkumar Sharma’s technique to achieve the effect that made the way for the santoor becoming a classical instrument. On typical stringed instruments, this effect is produced by pushing the string against the fret with the fingers, but a meend on the santoor is accomplished by delicately sliding the mallet from note-to-note.

Another popular technique involves muffling, or muting, the sound. The musician plays one side of the instrument with the mallet while holding the palm of the other hand against the strings of the opposite side. Striking the strings closer or further away from the bridges of each side produces different tones, as does the strength and grip on the mallets. After learning the basics from a santoor teacher, intermediate students will be able to develop their own individual style. 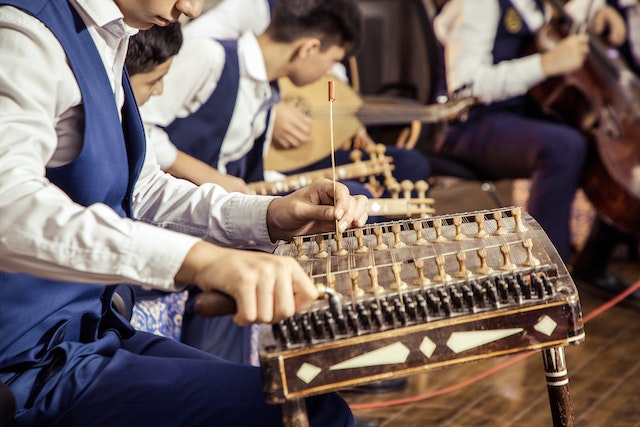 The tuning of the santoor is typically individual to the teacher or musician. In the classical tradition, santoors are tuned to each raga, with the player resetting each string between ragas. In the style of Pt. Shivkumar Sharma, the right-hand side was tuned to the raga and the left-hand side was tuned to the supporting notes. Santoors are also sometimes tuned to chromatic or pentatonic scales, or even a pattern unique to the player. There is much that is left up to the interpretation of the musician.

The typical santoor has a range of two-and-a-half to three octaves. The wider end of the instrument allows for lower pitched notes to be played and the opposite, tapered end produces high-pitched notes. The tuning pegs are used to increase or decrease the tension of the strings, raising and lowering the pitch respectively. The length and tension of the strings dictate the speed of vibration when struck, which is what distinguishes different pitches. Moving the bridges across the soundboard to the right or left also changes the tone and pitch of each course of strings. Many santoor teachers have their own style of sitting, tuning, and holding the instrument and mallets.

There are several notable santoor virtuosos from the last 40 or 50 years of its popularity. Below are some of the most talented and well-known Santoor players in India today: