The guitar is classified as a plucked string instrument, or chordophone, which produces sound by creating a vibration of the strings. They can have up to 18 strings depending on the type of guitar but most only have six. The sound is produced by creating vibration in the hollow body of an acoustic guitar or through an amplifier for an electric guitar. The guitar is traditionally made of wood and the strings of gut, nylon or steel. Unlike the hollow-bodied acoustic, electric guitars typically have a solid body to prevent feedback.

The strings are strummed or plucked using the fingers or a pick, and notes are achieved by pressing the strings against the fret on the neck of the instrument. The most common type of musical notation used for the guitar is tablature. Unlike typical Western musical notation which shows the notes on a staff, tablature shows the position of the fingers and the corresponding strings that should be plucked.

Originating in Spain, the guitar is one of the most widely used instruments in popular music throughout the world. The acoustic guitar has influenced many musical genres, including jazz, Western and Indian classical, mariachi, blues and folk. Additionally, the advent of the electric guitar and its loud, powerful sound was instrumental in the development of rock, blues and pop music. Unlike many string instruments, the guitar can have countless variations and modifications, making it popular in almost any genre. 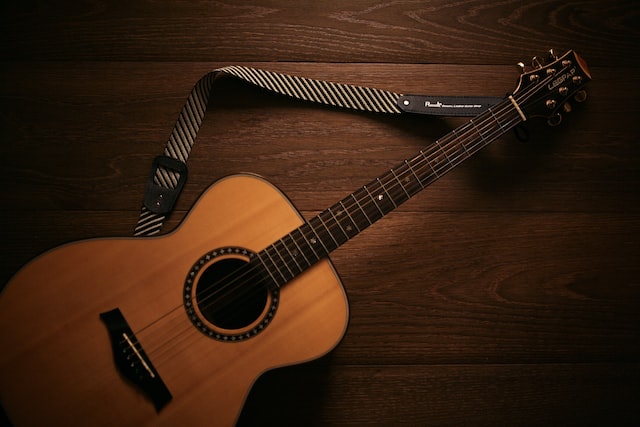 The guitar had many chordophone precursors, including the lute and the vihuela, and its exact origin is unknown. In 12th century Europe, the word ‘guitar’ described any string instrument with a long neck, frets, flat soundboard and back, and curved-in sides. However, a single instrument being referred to as a guitar began in Spain around the same time period. The next few centuries saw modifications to the design of the instrument until a likeness of the modern guitar emerged in 16th century Spain.

Early guitars varied in the number and tuning of strings until the emergence of the classical guitar in the 19th century. Replacing the popular practice of several double strings was six single strings tuned to E-A-D-G-B-E, which is still the standard Western tuning. It was during this time that the body of the guitar changed as well, becoming broader and shallower, which increased the richness of the sound. 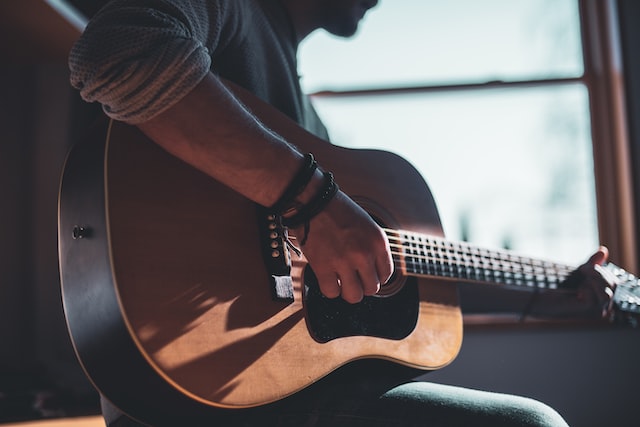 Outside of the standard acoustic and electric guitars, there are many different types and subtypes of guitars popularized in today’s music.

Classical Spanish guitars differ from standard acoustic by being strung with nylon strings and plucked by fingers. They also feature a wider, flatter neck that allows the musician to play complex notations more easily. The standard Spanish guitar was invented by Antonio de Torres Jurado in the 1800s and still uses the same design.

Flat-top guitars, also called steel guitars, typically have a larger body and a reinforced neck meant to hold the stronger steel strings. The instrument produces a brighter, louder tone and is popular in Hawaiian, folk, country and Hindustani classical music. These guitars may also be played with metal or glass slides.

Archtop guitars also use steel strings and have a curved top featuring f-holes. This type of guitar was influenced by the violin and produces a fuller sound. Archtops come in both electric and acoustic and are popular in contemporary jazz and country music.

Dobros are named for their inventor, John Dopyera and were created in the early 20th century. The guitar is similar to flat top acoustic guitars but the body includes brass, silver or steel in addition to wood. The resonator is typically made from aluminium and they produce a very loud sound without the use of an amplifier. Popular in blues music, this guitar is typically played face-up on the lap of the musician with a metal or glass slide.

The 12-string guitar has six sets of double strings, made in the style of the mandolin. While not as popular as the six-string standard, both acoustic and electric versions of the 12-string are popular in folk, blues and rock music for its chime-like sound.

Bass guitars are a popular accompaniment to the standard guitar, with both acoustic and electric versions. They’re usually larger than a standard guitar and have only four strings, tuned an octave below the six-string guitar.

Smaller guitar-like instruments share many similarities with the standard guitar, including shape and dimensions. However, each has specific differences that produce a multitude of sounds. Below are some of these smaller instruments: 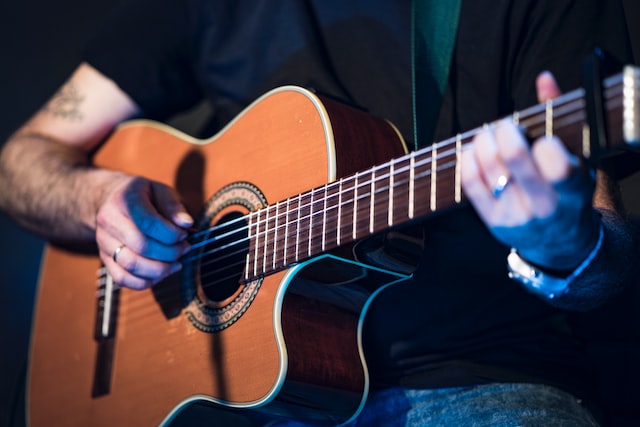 There are countless guitar playing techniques, from popular to individual, and many that are specific to musical genres. Below is a selection of some of the most widely used playing techniques and guitar terminology for beginners.

Percussive playing is another popular technique used in many genres. This style simply uses the body of the guitar as a percussion instrument by tapping or striking the instrument with different parts of the hand to affect different sounds.

Hammer-on and pull-off are two techniques that are directly opposite of each other. Hammer-on means to place a finger on the board behind a fret to sound a note instead of plucking the string. Pull-off is to pluck a fretted string and then immediately lift the finger off the neck. Both techniques produce a smoother sound than achieved from plucking a note.

Tapping is similar to the above techniques but is used consistently instead of for occasional effect. Both hands are used on the neck to push the strings into the fretboard to cause vibration instead of plucking or strumming on the body. Tapping is most popular on the electric guitar.

Barre chords are produced by using fingers or an object to press down all of the strings along a single fret. This technique allows the player to produce a chord that is restricted by the open string tuning of the instrument. 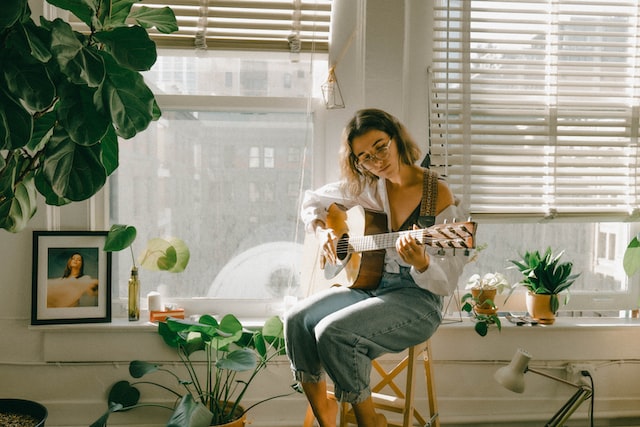 The pitch produced by the guitar depends on the notes that the strings are tuned to. The strings of a guitar are stretched from the tuning pegs at the top of the neck to the resonator located on the body. Tightening a string causes the pitch to be higher and loosening it causes the pitch to be lower. The six-string guitar has a standard tuning of E-A-D-G-B-E, which is what is used for most modern tablature and music. However, the guitar is considered a transposing instrument, which means tablature doesn’t always correspond to notes played.

Since the guitar is a popular instrument for improvisation and learning by ear, there is a large variety of alternate and improvised tunings. Open tuning, for example, is when the strings are tuned to a specific chord when strummed without any fingers on the fret. The strings of the guitar can also be tuned to the standard of another instrument, like the violin or the sitar. Some playing techniques even involve changing the tuning of the strings while playing.

There are countless great guitarists throughout history and the current day. Below are some of the most talented and well-known modern musicians from around the world: