The saxophone family was invented by Adolphe Sax, a Belgian instrument maker during the 19th century. His goal was to create a series of instruments that would be the most vocal woodwind and the most adaptive brass instrument. With the enduring popularity of the saxophone, he can be considered successful. The saxophone is widely featured in marching bands, jazz and big band ensembles, rock and roll groups, and a variety of other genres.

Most saxophones are made of brass but regardless, the sax is considered a member of the woodwind family because the sax has a single-reed mouthpiece. The sound created by the saxophone is a result of the vibrations from the reed into the body of the sax instead of the movements of the player’s lips as is the case in brass instruments. During play, holes in the body of the instrument are opened or closed by pressing or releasing the keys. Covering or opening a hole in the body will lower or raise the pitch, respectively.

Adolphe Sax originally presented two groups of saxophones. One series, pitched in C and F never gained popularity. The other series, pitched in B flat and E flat, has become the most popular although it was, in fact, a saxophone designed for military use. Most saxophones played today are in this series.

Adolphe returned in 1881, extending his original patent to include changes to lengthen the bell while extending the instrument’s range to include F sharp, and G by utilizing a fourth-octave key. Four years later, the first saxophone was built in the US by Gus Buescher.

The very next year, in 1886, the sax design changed again, this time including the right-hand C trill, as well as a half-hole system for the first fingers of both right-and-left hands. In 1888 the single octave key for the saxophone was invented, followed by rollers for the low E flat and C. In 1894 Adolphe Sax died and his son took over the family business.

Changes continued after his death and music books were published to include sax performances. Finally, in 1914, the saxophone reached the world of jazz bands and became the most popular saxophone music. In the jazz genre, the Saxophone became not only one of the signature sounds but also an iconic image displayed to denote the style. The jazz Saxophone quartet includes a B flat soprano, a B flat tenor, E flat alto, and E flat baritone. 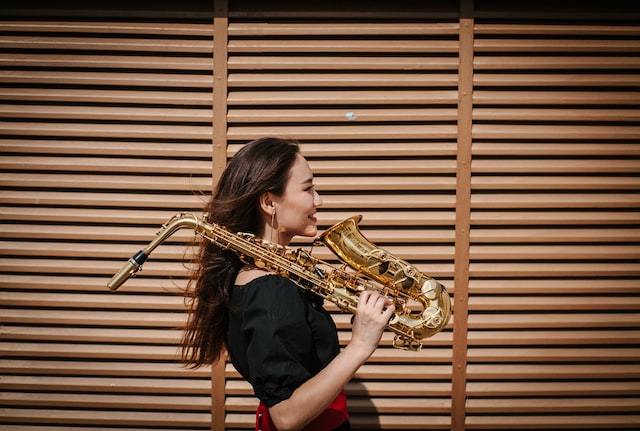 The iconic image displayed on most jazz album covers, and the instrument played by many popular saxophone players, is the tenor. This type is widely used in rock and jazz because of its ability to play in the key of B flat. The tenor is a relatively large version with smaller holes.

Regardless of the tenors’ popularity, it is the alto sax that is generally suggested for beginning saxophonists. The alto sax is a medium size, making it easier to hold. It also has a smaller mouthpiece, making it more suitable for smaller, younger beginners as well as easier to control for a beginner at any age. The body of the alto is curved into more of a “J” shape, and it plays the key of E flat.

Another type of saxophone is the soprano, the body of which can be either straight or curved. This sax recommended for experienced musicians. The soprano sax can create a wide variety of tones and requires extensive practice. It is often used by famous jazz saxophone players.

The baritone sax is the largest. Musicians that play the baritone typically wear a sling across their neck to help support the sax during play. The deep bass sound lends itself to jazz solos. The baritone even has an extension that allows it to play in a low “A”, increasing its range.

Other less common saxophone types are:

Playing techniques vary widely from one saxophonist to another depending on culture, musical genre, style of instrument, and style of a saxophonist. Learning to play the saxophone includes how the instrument is held, how the embouchure is formed and the airstream is produced, and how the fingers press each key. Each of these variations will create a different sound specializing in the role that instrument is given in musical compositions. Beyond the basics of vibrato and physicalities of playing the sax, there are extended techniques such as growling created when the saxophonist hums or growls in the back of their throat to create a deep and raspy sound in their music. Growling is used primarily in rock or jazz music.

Slap tonguing is used to create a percussive pop in the player’s sound. This pop, created by slapping the reed with the player’s tongue, is altered by air only to change the volume. The slaps can be pitched or not pitched. Flutter tonguing is used to create rolling “r” sounds in the notes and breath tone gives the music a breezy tone when the embouchure is relaxed and air controlled.

These techniques come together to create their “tonal concept,” meaning the style of the player. This tone will become their unique sound. The best saxophone players today each has a distinctive quality to their music.

Each saxophone has elements that may vary in some way but they will all consist of reeds, mouthpieces, tone holes, keys, neck, body, and bell. These elements are essential in creating the sound of the sax.

The reed is attached to the mouthpiece with an adjustable fastener called a ligature. The player will hold the mouthpiece and reed between their lips and blow air with enough pressure and velocity to make a vibration. This vibration will resonate through the mouth of the player and the sax. The reed is typically made of bamboo cane. While some saxophonists have had their preferences, it is widely accepted that the material of the mouthpiece has little or no effect on the sound created. There are many talented and famous saxophone players throughout history and modern day. Below are some of the best contemporary players from around the world.